Yammer and Sharepoint: How this Software Relationship is Aiming for the Modern Team

Yammer is now more integrated than ever, so check out what this business social space has to offer. 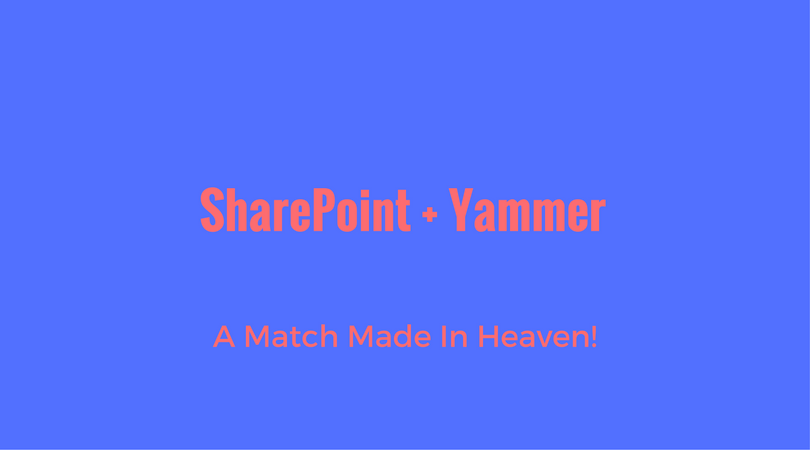 If your teams use Microsoft technology at work, there’s also a good chance they use Yammer, a social media app designed specifically for the workplace: Yammer allows employees to network, share posts and content, comment on topics, and answer questions (it looks a little bit like a minimalistic Facebook and a little bit like Office 365, too). Microsoft likes this idea – the company likes it so much, it’s working on several ways to make Yammer more useful, and specifically more connected with SharePoint data. Take a look at the ways that Yammer has recently changed, and what that could mean for your business.

A number of months ago, Yammer received an update that allows for seamless document sharing across all Office 365 applications, which absolutely includes data that you use on SharePoint. Basically, this allows people to easily share files no matter where they are kept when asking questions, explaining a point, or maybe just showing off a little. At any point, you can see the most recent documents you have worked on for quick sharing, but you if you have to go digging for a file, don’t worry about compatibility issues. If it’s on Office 365, you can post it in Yammer.

Office 365 Video is growing as well, and part of that growth is newfound compatibility with Yammer: In short, you can share and play videos from Office 365 or Microsoft Stream on Yammer. That’s in addition to videos from places like YouTube and Vimeo, which Yammer already supported. That may not sound like the biggest change to you, but video sharing was difficult to use on Yammer unless you were part of the marketing team or just wanted to share a joke: Now internal videos, safely encrypted on Office 365, can be watched and shared. This opens the door for Yammer-based work on presentations, interviews, and much more. It also allows for greater control over who can see the video, with authorization controls for private videos. Microsoft suggests that these videos can be used for Q&A, executive messages, product updates, and new product campaigns.

Connectors for Broader App Use

Connectors is an Office 365 feature that makes it possible to use many external (and highly popular) apps within the O365 framework. That makes it easier to utilize popular apps that everyone likes and that make some jobs far easier, from GitHub and Twitter to Trello and Asana (although probably not all at the same time). Anyone on Yammer using Office 365 Groups can choose to “Add or Remove Apps.” Any app that can be added can then be customized for posts in Yammer for updates, specific news stories, or even reports about weekly activity within that app. It’s especially useful for marketing, but it also has a lot to offer for workflow and productivity if used correctly – we don’t suggest piling up too many apps at one time.

Speaking of Microsoft Groups, Yammer has now begun offering something called “dynamic group membership.” Sure that sounds like one of those useless business terms that everyone laughs at, but in O365 it has a particular purpose: It means that groups are formed by rules – as in, “group up everyone working on this spreadsheet” or “group up all the team leaders” based on what kind of filters you use. When people switch projects or move into different positions, all the groups you look at or create are automatically (“dynamically”) updated so that the group continues to have an accurate membership without any manual authorization needed. Hey presto – now you can easily find specific groups of people on Yammer based on parameters you can decide, making communication much easier.

It’s no surprise that Yammer has received some more apps: It now works on an iPad, Windows or Mac device. That makes it easier to fit into a BYOD workplace or just a more flexible mobile environment.

Microsoft also plans on improving how SharePoint data shows up in Yammer and making other quality of life changes to the interface so it will be more useful to businesses. Basically, it’s a good time to start considering Yammer if you’ve been looking for an online conversation place that’s still safe for work but allows all your employees to communicate and share content easily. For more information on how to use Office 365 effectively and what new tech strategies are worth adopting in Twin Cities South Metro area, contact Tech Support of Minnesota today. You can send us a message at info@techsupportofmn.com or give us a call at (952) 758--7272 to learn more about our IT services.