What Role Do Robots Play In Healthcare? 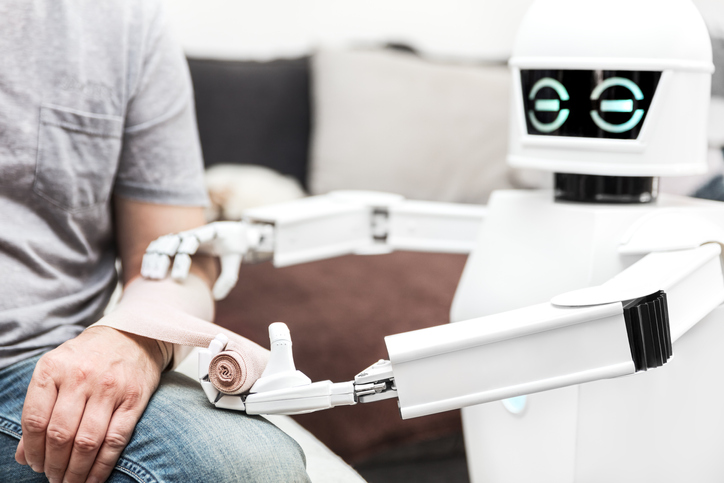 Artificial intelligence and robotics are poised to change the entire economic landscape over the coming decades, with an estimated 30% of existing jobs poised to be taken over by robots by 2030. Nowhere is this more evident than in healthcare. Many healthcare tasks are routine and prone to human error, making them prime targets for automation. At the same time, patients and ethics experts remain skeptical as to how robots may replace the expertise and compassionate presence of human medical providers.

Many people assume that robots in medicine remain years away, but the technologies currently deployed in medicine may come as a surprise. The first robotic device for surgical procedures, the da Vinci Surgical System, was initially approved by the Food and Drug Administration in 2000. It has performed more than 20,000 since, offering safe and reliable surgical interventions overseen by a human surgeon.

Surgery is not the only area of medicine where robots have made an impact. Powerful UV light-emitting robots disinfect surfaces and entire rooms, reducing risk of hospital-based infections such as MRSA or C. diff. Prosthetic robotic limbs interface with the nervous system to restore movement and the sense of touch to amputees. Automated dispensing robots limit medication dispensing errors in pharmacy settings. And clinical training robots offer lifelike simulations of medical conditions to help doctors during their training.

With each year, the role of automated systems in health care continues to expand. Industry experts predict a major shift in how health care is delivered over the next few decades. For example, robots are perfectly poised to increase access to medical services in rural or underserved areas. In a telehealth model, robots may collect routine clinical information such as a patient’s blood pressure, heart rate, breathing, and presenting symptoms. A remote specialist can then use the clinical information to make a diagnosis and offer a treatment plan.

Robots may also be deployed in rehabilitation settings to assist with physical therapy for patients with spinal cord injuries or neurologic diseases. Integrating robotics with virtual reality can help patients improve mobility, balance, strength, and coordination.

Human-sized robotics systems are not the only ways that robots may revolutionize medicine. Microbots or nanobots are tiny mechanical devices being developed to deliver drugs to specific sites. Currently, chemotherapy and other medical interventions cannot be specifically targeted to one area of the body. Researchers are developing microbots and nanobots made from biodegradable materials that can deliver medications without being attacked by the human immune system.

Limits of Robotics in Health Care

Despite the advantages of artificial intelligence and automation, there are significant drawbacks when considering how to provide high-quality clinical care. Take, for example, the experience of Catherine Quintana, whose 78-year-old father was taken to Kaiser Permanente Medical Center in Fremont, CA, due to chronic lung disease. Quintana was shocked when a robot rolled into the room to deliver some medical news — that her father was dying and that the only remaining treatment was palliative care.

Though extreme, this example points to one of the fundamental limitations of automation in health care. Even with cutting edge automation technology, robots are incapable of passing as humans. In particular, they cannot convey human emotions and struggle to handle complex questions. This limits the role of robots in health care. Though they may be used for some types of automation, when it comes to discussing complicated chemotherapy regimens with an oncologist or delivering the news that a loved one has Alzheimer’s disease, we continue to crave human touch.

Despite these limitations, robots have a clearly defined role in our medical landscape. Routine tasks with a high potential for human errors are perfectly poised to be taken over by automation. The ultimate question is how we, as patients, will react and adapt to this new era of robotic medicine.